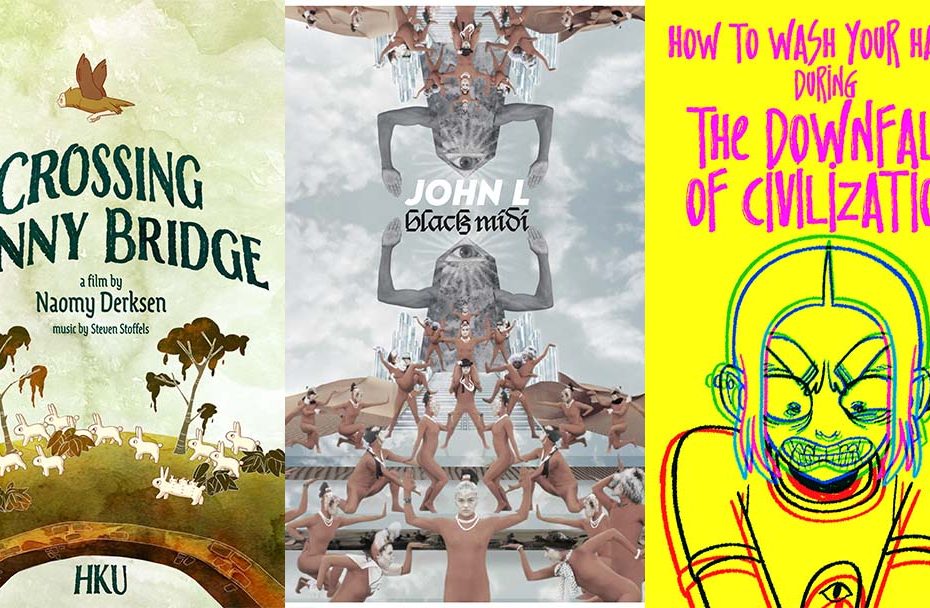 A group of rabbits cross a bridge in search of a new accommodation. The god of life decides to land in the empty town at the end of the bridge and so this will become their new home. Once everyone had gotten used to their new environment, a new face enters the city, completing the system, the god of death.

As the band breaks into two sides of a boxing ring, who will reign champion of the ring!

Hernán is a little kid dreamy who is not doing well in school. After his parents demand effort and sacrifice, he concentrates on his studies, let alone his imagination. Over the years he will be a successful man and one day he will realize that his most important dream is yet to be achieved.

How to Wash Your Hands During the Downfall of Civilization (Dir: Fedecrico Sproviero)

Luna washes her hands while everything falls apart.

An absurdist dance and animation extravaganza about when cult followers turn on their leader.

Kunu means curse. In the Marroon tradition of Surinam, people believe, that you can suffer from curses because of actions of your ancestors. Those curses come in different shapes and forms. Poverty, difficult family relationships, internal and mental struggle etc. Eight poetic texts and poems, written and voiced by Onias Landveld, Spoken word artist, playwright and former Poet Laureate of the city of Tilburg, formed the guideline for six POC composers and animators, to shape a special story of human struggle and growth. A struggle because of the consequences of trans- and intergenerational transmission, the modern day effects of historic slavery, family relationships, the escape of sectarian religion, and the search for identity.

La Paura del Buio is an experimental short film that talks about youth, violence and all the troubles you must go through because of who you are.

Why is always victim carrying a fault that it’s not theirs?

What’s wrong with the system?

After contemplating suicide, a man calls his wife one last time where we discover that all is not what it seems in their relationship. Secrets will be revealed and trust will be tested.

A poignant moment of joy and a significant rite of passage. It began with an innocent glance, a look of recognition which reflected the familiarity of the event. Five years ago, London-based artist Lewis Khan witnessed the aftermath of a secondary school prom in south London, the teenagers spilling out as glittering, colourful pinpricks of light and ecstasy into the bubbling city nightscape. This fleeting glance led to something magical: an intimate connection with multiple generations of students and an artistic project that captures a glimpse of the soul of what it means to be young in London today.

On the Surface (Dir: Fan Sissoko)

Ada, a young Black woman goes swimming in the Icelandic sea and reflects on her experience of raising a child in a country that feels nothing like home. As she enters the freezing water, she relives her traumatic pregnancy and postnatal depression. Soon her swimming eases. Being in the wild and facing her fears is helping her heal.

In a dystopian world where all music is banned, a young man puts his life on the line to get his hands on a music tape and listen to the sound one more time…

The Cosmic Order cannot seem to agree on the best creative approach to writing their second album. Josh, the bassist, believes in practice and experimentation, while Red, the frontman, wants to party; inspiration will follow. Tensions begin to rise when the bands photographer, Red’s ex, arrives at the studio. Meanwhile Josh struggles to find the right moment to break some terrible news to the rest of the band.

Those Were the Days (Dir: Kitty McMurdo-Schad)

After a lifetime of caring for others, a pioneering couple reflect on the utopia that shaped their families. ‘Those Were The Days’ sheds light on the unsung heroes of our communities and how our attitudes toward the care of those with special needs is changing – for better or for worse.

Jonathan visits his mother on her birthday bringing a card from his little daughter and an excuse from his wife – neither of which impresses Patricia. They barely communicate but find a route to understanding – of sorts – through the infamous first line of one of Larkin’s poems. “They fuck you up, your Mum and Dad”.

A young couple puzzles their way out of the first relationship crisis.